*Notes: The 96 does not include FL-21 which did get a new representative (Rep. Mario Diaz-Balart (R) moved over from FL-25).
Also note that two of the newly elected Republicans, Tom Reed (NY) and Marlin Stutzman (IN), were sworn in in November to fill the vacancies.

At Least 100 Seats in Play
How big would Democrats' losses be in the 2010 mid-term elections?  Over the previous 17 mid-term elections, the party holding the White House had lost an average of 28 House seats.  However, in 2010 Democrats were defending over 50 seats gained in 2006 and 2008.   There were also the 49 districts held by Democrats but won by McCain in 2008.  Particularly troubling for Democrats was the sour economy; the last monthly report before the 2010 elections showed an unemployment rate of 9.6% in September.

Meanwhile Republicans hoped to repeat their successes of 1994, when they reclaimed control of the House.  There were several differences from 1994, however.  In 1994 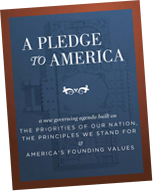 the prospect of Republicans gaining control of the House emerged late in the cycle, in October, whereas this year it had been seen as a possibility since the Scott Brown upset in the Massachusetts U.S. Senate special election in January 2010.  Also, in 1994 the unemployment rate was 5.6%.

There was considerable speculation about whether Republicans would produce a 2010 version of the "Contract with America."  On September 23 House Republican leaders formally unveiled "A Pledge to America," described as "a new governing agenda built by listening to you and focusing on your top priorities." [PDF] (>)  This document had a negligible impact on individual campaigns.

etheless, Republican candidates around the country did have a  consistent message of smaller government and lower taxes; many argued for repeal of Obamacare.  Speaker Nancy Pelosi was a frequent target.  In the Fall the RNC's "Fire Pelosi" bus tour visited 48 states.  In a post-election piece in Politico, Brad Todd and Mike Shields, who ran the NRCC's IE advertising, noted that Nancy Pelosi "did make an appearance in 63 percent of our 226 ads."  They added, "But Obama was an important co-star.  He appeared in more than one-quarter."

Republicans were motivated and fielded candidates in a record 430 of 435 districts.

Indeed, more candidates filed with the Federal Election Commission to run for the House in 2010 than any year since the FEC began keeping track in 1975, a total of 2,093; adding on candidates that didn't file with the FEC but appeared on state ballots, the total number of House candidates was 2,653.  An interesting example of this proliferation of candidates occurred in the non-competitive 30th CD of California, where veteran Rep. Henry Waxman (D) has won every race since the 2000 redistricting with at least 70% of the vote.  In 2008 Republicans could only manage a write-in candidate against Waxman.  This year five Republicans competed in the June 8 primary to run against him.  (Waxman ultimately won with 64.7% of the vote).

Historically, there have been comparatively few competitive House races come November.  For example, the Center for Responsive Politics noted that in Nov. 2008 Members enjoyed a re-election rate of 94% and only 46 races were decided by a margin of 10% or less (see also FairVote's "Dubious Democracy").  Voter dissatisfaction and anger created a decidedly different dynamic this cycle.  House Republican Leader John Boehner caused a bit of a stir in late April 2010 when he said he believed at least 100 seats were in play (Boehner did not say, as was reported by some outlets, that Republicans could win at least 100 seats--a very different proposition).  That number remained fairly consistent.  On October 21 NRCC Chairman Pete Sessions opined that "there are easily 95 to 100 seats" in play.  The Center for Responsive Politics categorized 111 seats as in play.  There were an amazing number of races where the Republican candidate appeared to most observers to have no chance of winning in the summer or even into September, and yet on Election Day he or she prevailed.

Party Committees and Other Groups
At the center of the activity were the DCCC, chaired for a second term by Rep. Chris Van Hollen (MD), and the NRCC, chaired by Rep. Pete Sessions (TX).  The party committees' work started with incumbent retention and recruiting strong candidates.  Both party committees had programs to defend vulnerable incumbents.  The DCCC's Frontline Program, which supported its more vulnerable Members, included 42 incumbents (of whom 31 were defeated).  The NRCC's Patriot Program had "potentially targeted incumbents commit themselves to meet rigorous goals that will strengthen their campaigns to ensure victory."  This list included 27 incumbents (of whom two were defeated).  On the flip side, both parties promoted attractive challengers.  The NRCC's Young Guns Program ultimately included 92 candidates.  Democrats' Red to Blue Program had several dozen candidates (1, 2).

Another very important function of the DCCC and the NRCC is to raise and spend money.  For the cycle, the DCCC raised $129.1 million and spent $104.8 million and the NRCC raised $107.2 million and spent $96 million.  According to the Campaign Finance Institute (1), based on reports through November 4, independent spending on House races by the party committees totaled $116.4 million, $65.0 million by Democrats and $51.3 million by Republicans.  The NRCC itself reported spending $54 million in 90 congressional districts.  A NRCC memo ("Looking Back at the 2010 Cycle") emphasized the importance of how the money was spent.  The memo states, "By investing resources early in key races that expanded the playing field, we forced the Democrats into a game of 'Whac-a-Mole' that required them to constantly play defense in an unsuccessful effort to stop the bleeding."  By contrast, the DCCC was said to have held onto more of its money until relatively late.

The respective party committees also try to frame the debate both nationally and in individual races.  Heading into the August recess, for example, both the DCCC ("Democrats Will Win This November" [PDF]) and the NRCC ("The Dems' 'Run for Cover Summer'" [PDF]) saw grounds for optimism.  As September progressed, however, most observers foresaw a good chance of a Republican takeover of the House (see for example APSA press release "Election Forecasts..." or NRCC memos "Pushing the Boundaries..." and "Closing the Deal").  DCCC chair Van Hollen nonetheless continued to assert that Democrats would hold on to the House.  He pointed to extreme Republican candidates and argued that unlike in 2004 Democrats had been preparing for months and would not be caught unawares.  In addition to framing the big picture, both committees also engaged in a continual back and forth over closely contested races, issuing a steady stream of press releases pointing out the faults and flaws of opposing candidates, frequently a number of times, just to make sure the points were absolutely clear and were not missed or overlooked by reporters.

How Serious a Drubbing?
Just about every observer agreed Republicans would gain the 39 seats they needed; the question as Election Day approached was how serious a drubbing the Democrats would bear.  When all the votes were tallied, Republicans had gained 63 seats, the most since they gained 80 seats in 1938.

In 32 states Republicans achieved net gains of House seats.  Of the 49 congressional districts which voted for McCain for President but sent a Democrat to Congress in 2008, Republicans won 37.  Republican scored gains in states big and small, picking up six seats in New York and five each in Ohio and Pennsylvania, while also claiming the at-large seats in North Dakota and South Dakota.  A total of 58 incumbents were defeated (four during the primaries and 54 during the general election), of which 54 were Democrats.  Twenty-one of the Democratic freshmen elected in 2008 were defeated in 2010 (this includes Rep. Parker Griffith (AL) who switched parties and was defeated in the primary; in addition freshman Rep. Scott Murphy (NY), elected in a March 2009 special election, lost his seat.  Veteran Democrats likewise fell, including three committee chairmen (Spratt-Budget, Skelton-Armed Services and Oberstar-Transportation and Infrastructure).  Of 54 members of the Blue Dog Coalition, six retired and 22 were defeated.

In a surprising postscript, on November 17, little more than two weeks after the defeat of so many members, House Democrats elected to return Nancy Pelosi as their leader.